The demand for rice starch and rice flour has increased over the past few years. Rice specialist Beneo was therefore looking to expand its warehouses in terms of storage capacity. Toyota partnered up with them to achieve their storage goals and offered them a shuttle and racking solution to optimise their storage space. Beneo is one of the leading food producers in Europe, it’s part of the Südzucker Group and is present in over 80 countries worldwide. Beneo is a global expert in exploring and converting rice varieties into naturally derived, functional starch, flour, and highly digestible protein. Their main produce consists of rice flour, rice starch and some other similar goods. Healthy products that have several benefits and assets such as their allergy-free properties; rice flour and rice starch cannot trigger an allergic reaction. Their rice starch is also a natural product, making it nature and environmentally friendly, which is a hot topic in our modern society. Additionally, it’s good for our diet as we should eat a variety of healthy food. Rice could be used as an alternative to other starchy products like pasta and potatoes. Humanity has grown to be more nature and health-conscious and that is why the demand for rice starch, rice flour and related products has massively increased in recent years. This dietary evolution resulted in a dire need for expansion in Beneo’s warehouses and their wish to add more shuttles and find racking solutions. 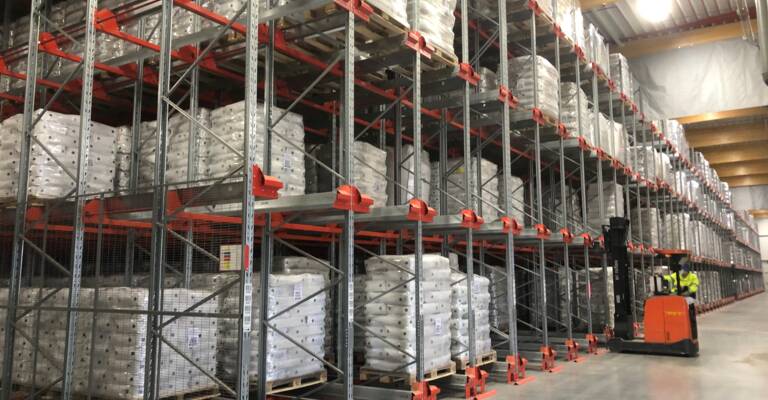 ‘Beneo’s supply chain was established in 2012,’ says Supply Chain Manager Sabine Festjens. ‘One of our problems was that we didn’t have enough storage capacity. The goods we produced were put on pallets and simply stored on the ground, so our capacity was very low, and a lot had to be transported and stored at external warehouses’, continues Sabine, ‘on top of that, our products are subject to fairly rigorous analyses. These often take a few days. Put these two prerequisites together and you’ll understand why we concluded that it was useful for Beneo to optimise its storage capacity.’

Radioshuttles: the optimal and advantageous solution

‘Then we investigated which warehouse areas have the same issues; for example, the freezer room, where space is extremely valuable. We had one goal in mind: increase our capacity as much as possible in the shortest possible time with minimum investment. That’s how we ended up with the concept of a shuttle system. We decided to partner up with Toyota Material Handling to achieve what we had in mind through their Radioshuttles.’ says Sabine Festjens.

‘We also have an oven area, a very valuable space that is now optimally in use. We want to make use of as much space as possible. Furthermore, the Radioshuttle system provides good air circulation, which is something crucial when working with ovens. The shuttles can be programmed to leave some distance between the pallets, and they offer a solution to our batches of thirty to forty tonnes while respecting the first-in, first-out (FIFO) principle. The Radioshuttles perfectly answer our needs and have answered many of our questions. It goes without saying that we are tremendously satisfied with Toyota. We even chose to do future expansions with them and have continuously been growing with their support,’ says Sabine. An excellent and flexible project partner

‘There are three main reasons why we chose to work with Toyota Material Handling: first of all, Toyota always adjusted its design and solutions to our needs and wishes. We immediately received an efficient answer to all our questions, especially those regarding storage volume, drawings, etcetera. Their consultant, Wilfried Elsen, was very flexible in answering every single question and handling all of our extensions. They also offered us to be part of their RFID tags pilot project, meaning our shuttles are equipped with a tag reader and Wi-Fi router. So, our shuttles are “smart shuttles” and send data to our WMS-system,’ explains Sabine, ‘Furthermore, Toyota is our Engineering department’s preferred supplier thanks to their outstanding quality of service and great equipment. Finally, they are already a very well-known company within our group, and we are happy with the quality they offer.’

‘We are very satisfied and highly recommend Toyota’s shuttle and racking solutions. They offered us the ideal solution to our problems, like the oven area, in a short period of time. Every single space we could put these Radioshuttles, is now filled to the brim with shuttles. We were ahead of schedule, so our last shuttle expansion came much earlier than originally planned. A secondary reason to complete our expansion journey early on was that the investment needed to expand was relatively low when you compare it to the vastness and grandeur of the project and to its output. Needless to say, the return on investment is very good. It’s also important to note that we have very few to no problems with our shuttles,’ concludes Sabine Festjens - Supply Chain Manager Beneo.