To improve safety in their operations, roof window manufacturer VELUX implemented Team Challenge. This gamification tool is based on I_Site fleet management from Toyota and uses data from the connected trucks at the VELUX site. Team Challenge brought immediate results and showed a clear decrease in collisions. 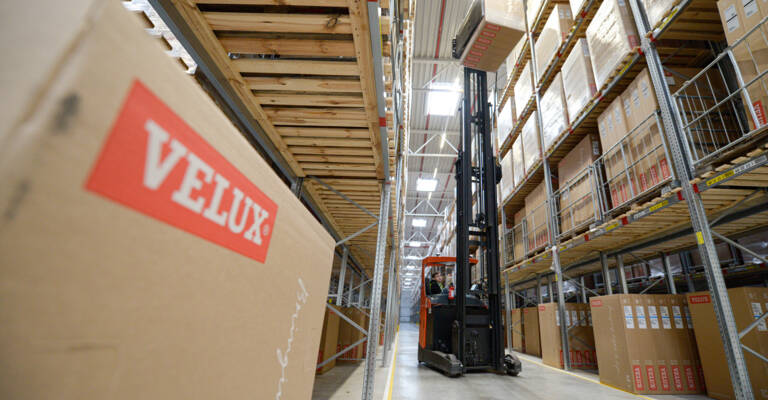 JTJ Sonneborn Industrie GmbH, based in Sonneborn, Germany, produces high-quality wood and plastic windows for the VELUX Group in the German market and for Europe-wide export. With the help of a very modern vehicle fleet on a total area of ​​approx. 230,000 m², the company stands for state-of-the-art manufacturing technology, high productivity and continuous quality improvement.

In 2018, the European central warehouse moved from Kolding in Denmark to Sonneborn in Thuringia, the largest restructuring that VELUX has ever undertaken. This was an enormous challenge for people and machines. For more clarity and transparency, all vehicle and operating data is gathered in the Toyota fleet management system I_Site.

Since 2018, Toyota Material Handling has been equipping all warehouse trucks with a telematics unit to transfer relevant data to I_Site. This way, VELUX can measure the performance and utilisation of its vehicles, as well as the efficiency in key areas such as cost control and safety. Safety is key for VELUX, therefore they introduced the Team Challenge game from I_Site in spring 2020 with a clear result: more safety in the warehouse. 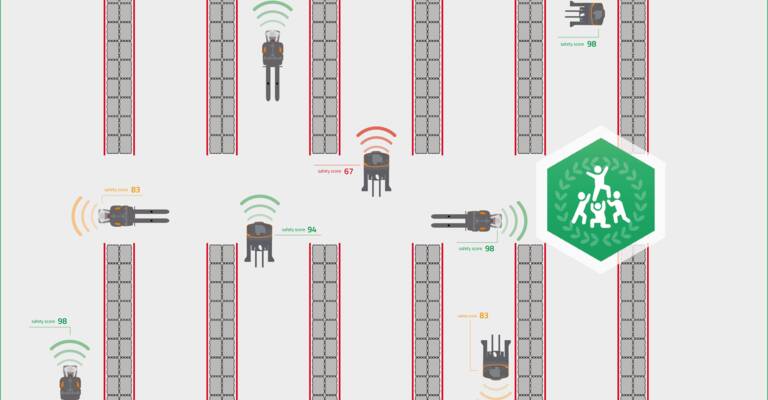 Why gamification has a positive effect on behaviour

The idea behind gamification is to combine the daily work with a playful approach to increase employees’ motivation. Because we all have a bit of competitiveness in us. When competing against other teams for points, we all act differently. Sportsmanship and team spirit inspire people to become the winning team and be rewarded. Team Challenge from I_Site is based on this idea. The concept of gamification inspired a developer at Toyota Material Handling to develop a game that increases safety in the warehouse.

VELUX is a long-standing customer of Toyota Material Handling Germany. The manufacturer of roof windows supplies its customers from the European central warehouse in Sonneborn in Thuringia. In order to increase the efficiency of its fleet and to minimise downtime, VELUX has equipped all of its warehouse forklifts with the I_Site fleet management system from Toyota.

A goal set by the company’s management, ‘Vision Zero’, aims to reduce the number of work accidents to zero. Team Challenge from I_Site was specifically developed to increase work safety in the warehouse, so the offer to try out Team Challenge came at just the right time. 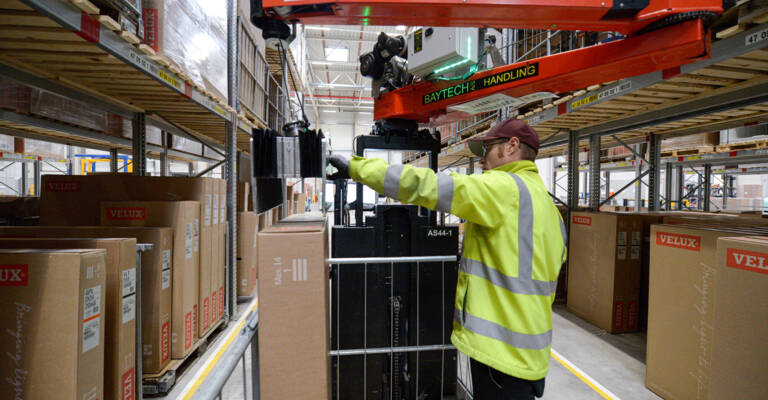 At VELUX in Sonneborn, 90 logistics employees take care of the order picking and the storage and retrieval of goods. The skylights are packed, but careful handling of the goods is top priority. Although the employees are trained well, accidents and collisions occur during work. This is where Team Challenge comes in. The employees from VELUX formed teams and competed against each other during a selected time period. The forklift trucks equipped with sensors register light, medium and hard shocks. These are recorded in the I_Site fleet management system and can then be evaluated. Depending on the number of collisions, the individual driver as well as his/her team receive a score value. The winner is the team with the safest driving style and the fewest "shocks". The time between the individual shocks was also measured.

In order to understand the impact of the game on the driving behaviour of the employees, the number of collisions during the game was compared with the period before and after. The values ​​in the month before the game, during the three-week Team Challenge and four weeks afterwards were used.

Participation in the Team Challenge was voluntary: 40 employees decided to form four teams. At the end, the employees were informed about the performance of their team.

The logistics employees did their normal work during the game. The only difference is that the nature of the game encourages operators to drive with more foresight. The drivers with the fewest collisions are rewarded. Others who are more careless fall behind in the team ranking.

Overall, the aim is to avoid accidents and personal injury. The employer benefits from a more careful driving style of the employees, which contributes to a higher level of occupational safety for everyone involved. Fewer collisions also means that the equipment and storage technology are protected and the high-quality products are not damaged. 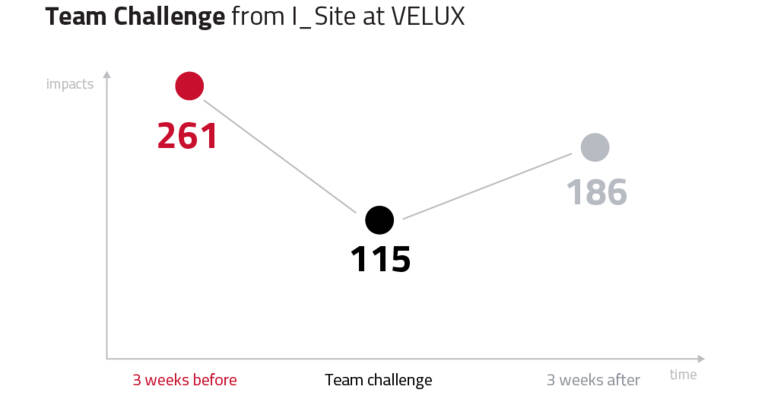 The frequency of the “strong” shocks before the start of the challenge was also compared with the frequency during the challenge. Here, the improvement was clear as well: if there were 69 hours between such an incident before the game, it took 93 hours during the game before another severe shock occurred. The teams have improved by 35 percent here.

How you can benefit from Team Challenge

1. Increased safety
After the evaluation it was clear to everyone that the number of collisions had decreased. The winning team was of course happy with the prizes (among which a Bluetooth speaker or vacuum flask), but the big win was the added security for everyone involved. After the challenge, the drivers were asked about their impressions: 70% of employees said that Team Challenge made their work environment safer. The game has helped employees drive more proactively and carefully. The results prove that a game like Team Challenge from I_Site can lead to a change in behaviour. In a playful way, the employees were encouraged to drive safely.

2. Less damage to material and warehouse equipment
The challenge paid off for VELUX since they experienced fewer collisions and therefore less material damage. It is also beneficial for the infrastructure when the high-bay warehouse and floors are not so strained.

3. Getting a little closer to “Vision Zero”
Conclusion by Patrick von Bismarck, head of department in the VELUX central warehouse in Europe: “With Team Challenge, we not only wanted to get closer to our goal of 'Vision Zero', but also let the fleet management system be better known among employees. I_Site shouldn't be a mystery to them. When an employee who really appreciated the extra security in the work environment thanked me expressly, I felt like we managed to reach our goal.”

4. Functions as team building
According to von Bismarck, the game is also very suitable for team building. The competitive nature improved the team spirit. “We didn't let them play shift against shift, but instead placed the teams together across shifts.” The team members unanimously found the game to be positive. 95% of them would recommend the challenge to others.

5. Transparency is the basis for further improvements
A greater transparency, achieved by using a fleet management system, creates the basis for increased work safety. It's not about exposing a single employee or identifying the speeders. The game is not a control instrument but helps to uncover problem areas. From the evaluation, the head of department was able to see, for example, which type of truck had the most accidents. 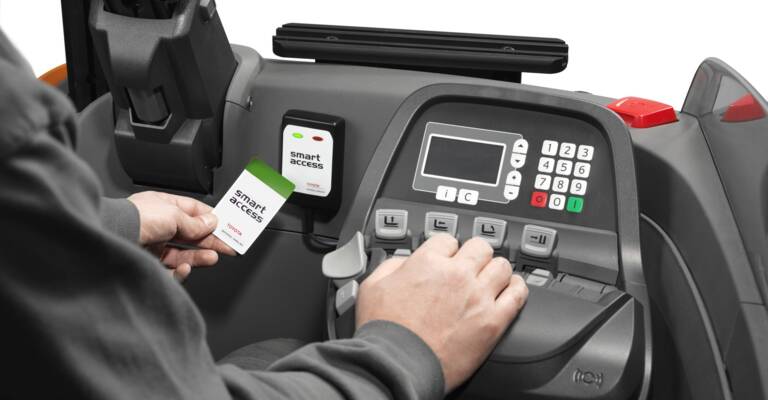 Department heads and shift managers at VELUX are satisfied with the process and the results of Team Challenge and are already planning the next steps. Von Bismarck: “We can imagine playing the challenge again, this time with the pre-op check function, i.e. a query directly on the device that every driver has to go through when the truck is switched on. We want to move away from the list ticked off by hand towards a digital check. We will also definitely expand the use of I_Site. In addition to the pre-op check, we will introduce Smart Access. This enables the driver to unlock the truck with their employee card. We also want to use I_Site more for evaluations and maintenance planning."

Toyota is convinced that Team Challenge from I_Site offers warehouse operators an excellent opportunity to raise their team's awareness of the issue of safety - in a playful way. The close cooperation between VELUX and Toyota Material Handling will continue beyond the pilot test. Toyota supports the roof window manufacturer in benefiting from the various possibilities of I_Site and thereby continuously improving the processes in the warehouse. I_Site is an analysis tool that, if used correctly, leads to more transparency which companies can use to save costs, for example in the area of ​​service.

Improve safety and productivity in your warehouse with I_Site Explorer