Antwerp Euroterminal or AET is the biggest multipurpose terminal in Europe located in the harbour of Antwerp in Belgium. Together with their partners, they decided to test out a Toyota hydrogen fuel cell truck and use a mobile charging station in their new sustainability project. 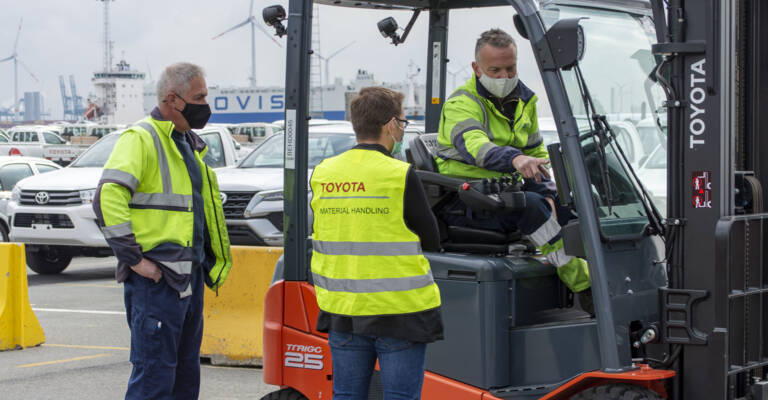 Antwerp Euroterminal or AET is the biggest multipurpose terminal in Europe and can be found in the harbour of Antwerp in Belgium. They specialise in several types of cargo, from containers and breakbulk to vehicles, heavy lift, project cargo and many others. Most of their activities do involve ship handling and RoRo (roll-on/roll-off) and LoLo (lift-on/lift off) units. AET is part of the Grimaldi Group and home to many of its ships, but it’s also a distribution hub for Toyota and other car brands. Grimaldi Group focuses on reducing the planet’s carbon footprint and aims for greener solutions to sea and air transportation. The harbour of Antwerp, where AET is located, is the ideal location for green energy solutions; thanks to many wind turbines and several companies that have H2 as a residual product from their activities. It’s therefore the perfect place to test hydrogen-fuelled equipment. In the global journey to find an energy source that is fit for cargo and transportation, hydrogen has increasingly frequently been labelled as an environmentally friendly alternative to fossil fuels. The decision to use hydrogen fuel cell for forklifts, trucks, straddle carriers, cranes, etc. is not an easy one since few transportation solutions allow a hydrogen tank and battery to co-exist. The implementation of hydrogen fuel cell vehicles also requires planning and a clear deployment strategy concerning the hydrogen fuel station structure. On top of that: fuel cell technology is a large investment that comes with a price.

Hydrogen power does have some big advantages in comparison to lead-acid or lithium-ion power: it has a bigger range, its machines have a shorter fuelling span and require less maintenance than lead-acid. Just like lithium-ion batteries, the power output from fuel cells remains independent of how full the tank is. Antwerp Euroterminal and partners decided to test out a Toyota hydrogen fuel cell truck and use a mobile charging station in their new sustainability project. 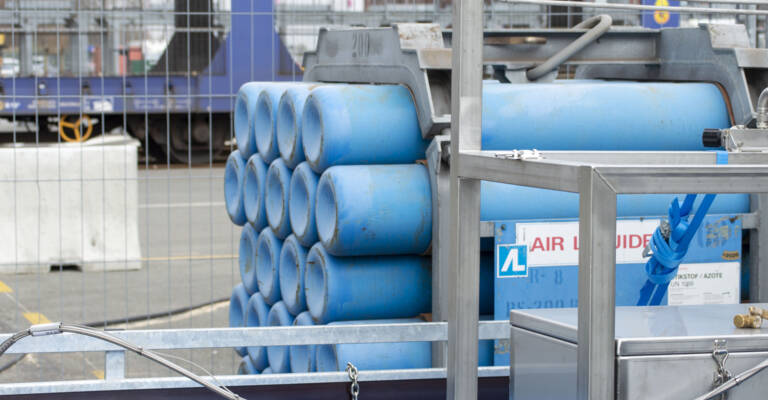 Project ‘Hydrolog’ has many partners and contributors (seventeen total), among which AET, VIL, Toyota. It was launched as a pilot project to show that there is room for renewable energy like hydrogen in a demanding logistics environment like a harbour. Since hydrogen-fuelled material handling requires a large investment (trucks, fuelling station...) VIL asked the organisation Waterstofnet to cooperate, Waterstofnet offered its mobile refuelling station for free. The European Union recognised the possible benefits of project ‘Hydrolog’ and decided to subsidise it, reducing investment costs. Toyota supplied the fuel cell truck.

The hydrogen-powered truck received some promising feedback and many positive reactions at AET: ‘After using the truck, we can compare the characteristics of the hydrogen truck with the electrical forklift’s benefits: adjustable, rigorous in usage, agile, almost completely silent and no more exhaust fumes. Furthermore, after a long and especially productive day, we can immediately refuel the truck. With an empty tank, it will take you about ten minutes, much like a diesel forklift. Unlike our lead-acid-powered trucks, the hydrogen-powered truck does not need its battery to be replaced and unlike Li-ion, it does not need opportunity charging. It was a very pleasant experience for us,’ says Luc De Ben – Terminal Support Coordinator at AET. A static hydrogen station, however, is faster than a mobile station in terms of refuelling your truck: it takes only two to three minutes to fill up the tank. 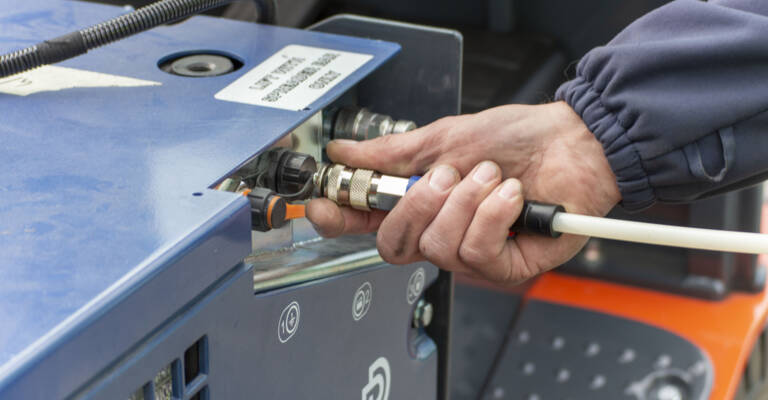 The largest drawback for most companies to invest in hydrogen fuel cell is the price of hydrogen-fuelled solutions. Project ‘Hydrolog’ tried to keep its costs to a minimum. A mobile hydrogen station can be purchased together with several partners and can be shared accordingly. This can reduce the initial investment cost of these lean and green machines. Some hydrogen-related projects, like project ‘Hydrolog’, are subject to a subsidy so the initial investment cost will be relatively low.

Additionally, the investors will not need to install several series of pipelines to supply their station with hydrogen which reduces the infrastructural costs and worries: ‘With ‘Hydrolog’ we do not only want to find a solution for the infrastructure of hydrogen stations, we also want to show that there are more and more internal transportation possibilities that can be equipped with hydrogen tanks. That way we can avoid the chicken and egg situation and have a worthy follow-up for our already broadly available machines,’ says Filip Van Hulle – Project Manager at VIL. Project coordinators Luc and Karl are also very happy with the project: ‘It was a very interesting and positive experience! Hydrogen energy really gives us many possibilities regarding a more sustainable future.’ 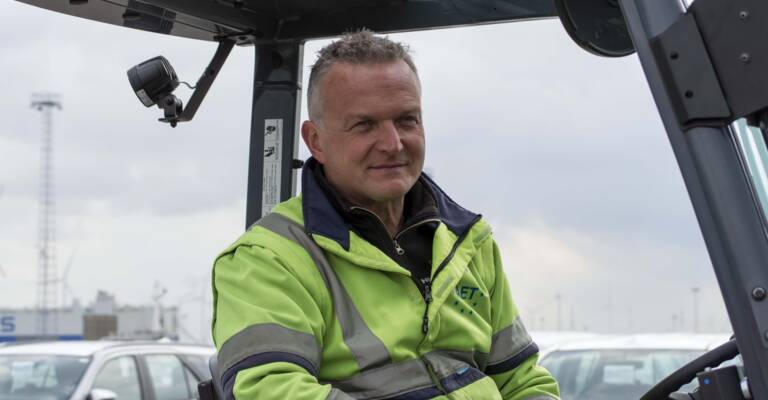 A clean and green Europe

The VIL-project ‘Hydrolog’ at AET shows us that switching to hydrogen-fuelled solutions for heavy-duty electric transportation material is certainly possible and is heavily supported. The Flemish minister of economy, innovation and work, Hilde Crevits, agrees: ‘This project shows that switching to hydrogen as an energy carrier is possible in real life, even in logistics. It will help us reduce the carbon footprint of heavy-duty machinery. I am rejoiced to see that VIL and its project partners are using this opportunity to put Flanders on the map as a leading figure in hydrogen solutions.’ Although Flanders may have had the scoop on hydrogen energy in logistics, the benefits of this renewable energy source will stretch all the way across Europe and maybe even across the globe.